In 2009, we performed Fauré’s Requiem with the New Caledonian choir Les Alizés in St Joseph's Cathedral, Noumea. In return, Les Alizés visited Canberra in March 2011 to combine in a joint performance of Berlioz' Te Deum.

In 2010 we celebrated our 30th birthday with a concert featuring Brahms’ German Requiem.

The Llewellyn Choir is an incorporated body in the ACT. The Committee is elected annually and takes the normal format of officers, plus committee members with a representative of each voice part also on the committee. 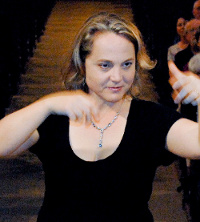 In 2009 Rowan was awarded the Stuart and Norma Leslie Churchill Fellowship to further her studies in conducting in Europe and the United States. In 2010 she conducted the Canberra Youth Orchestra in its performance of Beethoven’s Symphony No. 4 and Stravinsky’s Firebird Suite, and the Canberra Choral Society in a concert of English music in 2011.

In Sydney, Rowan has worked with Sonic Art Ensemble (formerly The Seymour Group) and regularly performs in the Freshwater Chamber Music Festival in Sydney at which she conducted Prokofiev’s Peter and the Wolf for the Conservatorium High School Alumni in 2009. Rowan also regularly conducts the Ku-ring-gai Philharmonic Orchestra in Sydney. 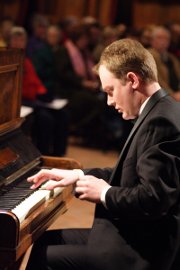 Anthony Smith has been the The Llewellyn Choir's répétiteur since 2002. He has performed in Australia, England, New Caledonia, New Zealand, the USA and Sweden. As well as accompanying tertiary-level students at the ANU School of Music, he performs with choirs, ensembles and instrumentalists throughout the Canberra region. In December 2004 he released a CD A Year in Paris with clarinetist Nicole Canham on the Move label.

Anthony made his concert debut in July 2005, playing Schumann's Piano Concerto in A Minor with the National Capital Orchestra. In July 2007 Anthony gave a recital in conjunction with the National Gallery of Australia retrospective of the artist George W. Lambert, which included the Piano Sonata of Constant Lambert, the artist's son. Anthony's continuing interest in the life and works of Constant Lambert is the focus of his current PhD candidature at ANU, which he commenced in February 2008.

Anthony’s compositions include The Will to Freedom, a music-theatre work that premièred in August 2010. For The Llewellyn Choir he composed Prologue to the Coventry Mystery Play, which the choir performed in 2013.

Margaret Smiles was for many years the accompanist for The Llewellyn Choir. After her untimely death the Choir decided to create an annual competition for accompanists in her memory.

The resultant Margaret Smiles Accompanist Competition is held annually at the ANU School of Music. It provides a forum for inspiring performances by some of the most talented and accomplished young musicians from the School.

Read about the award and about Margaret's life in this article from The Canberra Times of 1 November 2000. 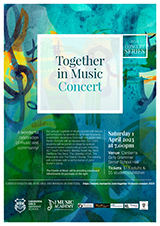